“All these birds, insects, animals, reptiles, whistling, whispering, screaming, howling, croaking, fish in their kinds teeming, plants thrusting and struggling, life in its million, its billion forms, the greatest concentration of living things on this continent, they made up the first Florida.”

Identifying these trees was a real puzzler.
For months, I have driven by this local stand of tall, wispy, pine trees with unusually long, 12 to 16 inch needles. The trees are green all year. I assumed at first that they were native Longleaf Pines. Longleaf Pines have the longest needles (hence the name) of any Florida Pine.  But then I realized it couldn’t be. For one thing, Longleaf Pines are quite common and I’ve only seen these mystery trees in this one spot. And two, Longleaf Pines have needles in clumps, with a somewhat French Poodly appearance. 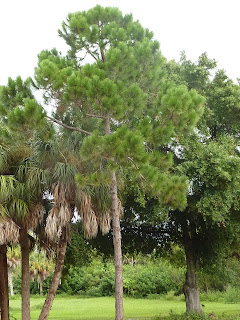 So I went to look it up in my Florida Audubon Field Guide. The guide divides trees into two main divisions: Conifers (technically Gymnosperms, commonly pines), and Flowering Trees (or Angiosperms).  Five conifers were shown, but none matched.   Next I went on line and searched “Conifers of Florida.” The University of Florida listed 10 common Florida Pines, but still, none matched my mystery tree.


Now I was challenged. So I got on my bike and went for a close-up inspection.  The needles were long and thin, with tiny nodules on them. The cones were small brownish green woody balls.
The bark was grayish brown and smooth, unlike the furrowed or scaly bark of pines.
This little forest was perhaps 100 yds by 100 yds. The perimeter was quite dense with new growth and saplings. But inside the perimeter, where little sun makes it through the thick canopy, hardly a weed or other plant was seen.  This is most unusual in Florida, where untended land is quickly overrun with all sorts of growth.
I considered that perhaps this wasn’t a conifer at all. So, back home, I widened my search to include all Florida trees.  Florida has over 300 native and 1000 exotic species, so this became a daunting task.  But the search did result in one article entitled “Identifying Invasive Australian Pine Trees”.  One more click and there was my mystery tree…the invasive Australian pine, also known as Ironwood, Beefwood and She Oak. The tree was described as deciduous, even though it remains green all year round.
This tree is quite unusual and a very aggressive competitor. First, in spite of its common name, it’s not a pine at all!   It is a Flowering Tree closer related to oaks than pines. The “needles” are actually branchlets with tiny scale-like leaves attached. The “cones” are actually a small nut-like fruit with winged seeds that are spread long distances by the wind.
But the most amazing feature of the Australian pine is its ability to take over existing habitats. The tree grows 5 to 10 feet a year and can reach 150 feet tall! The fallen branchlets and leaves contain a chemical that targets and inhibits the growth of other plants on the forest floor, so there is virtually no understory.  This phenomenon is called allelopathy. This most deplored survival strategy is similar to that used by the Roman general Scipio Africanus in 146 BC when he “salted the earth” of defeated Carthage, leaving the land sterile and uninhabitable.
Florida and Hawaii are currently the only states with stands of this invasive species. In another example of the Law of Unintended Consequences (and man’s shortsightedness), Australian pines were intentionally introduced here for lumber, canal stabilization and landscaping around 1900. In the past 15 years they have quadrupled their number in the wild, displacing more desirable Mangrove, Oaks and Palms.  Their shallow roots make them very susceptible to blow-over in storms, thereby destabilizing fragile shorelines.
This experience also proved once more I should not rely too heavily on common names or terms when identifying species.  “Pine” and “evergreen” are not synonymous. “Deciduous” and “broadleaf” are not the same. “Branches” can look like “needles”. “Fruit” can look like “pine cones”.  I really need to get a Tree Identifying Application from the app store.
Posted by Skip's Florida at 2:29 PM

Skip's Florida
"If we look close enough and long enough, we just might start to see."